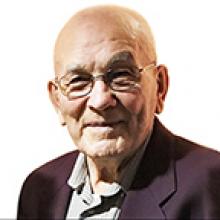 
William (Bill) Giesbrecht entered into the presence of his Saviour on May 19, 2022, in his youngest daughter's home, with his wife and family by his side. Bill is survived by his wife Katharina (Tina) and five of their six children: Bernice (Henry Guenther), Will (Diane), Lawrence/Larry (Linda), Laurie (Jake Klassen), and Danny (Helen); predeceased by their youngest son Donald (Francene) in 2020.
Bill was born on May 18, 1932, in Steinbach, Manitoba. He married Tina Martens on September 12, 1954, after a whirlwind courtship. Together they raised six children, and were the proud grandparents to eighteen grandchildren, plus step grandchildren and many great grandchildren. He is survived by his brother Johnny (Joy) of Calgary, Alberta, and many nieces and nephews. He was predeceased by both his parents William and Helena, four sisters - Kay (Al), Mary, Susie (Henry) (Cornelius) and Annie (Henry), one son, and two infant grandsons Nathan and Nicholas.
Bill was a carpenter by trade, but his heart was with people, listening to their stories and sharing Jesus with them through teaching and example. In 1969, Bill and Tina were called by God to move to Leamington, Ontario, to help plant a new EMMC church. They poured themselves into ministry, and through more than fifty years of faithful service, God greatly used them and blessed them. They were always given to hospitality, and became much loved "bonus" parents and grandparents to many dear friends. Bill memorized hundreds of scriptures and songs, and was always ready to give a joyful answer for the hope he had. He loved his family, and made a friend of everyone he met, but he found his greatest joy in pleasing and glorifying his Father in Heaven. His love and witness will always live on in the hearts and lives of many, especially his family!
A heartfelt thanks for the attentive care by the local Home and Community Care Support Services, especially Dr. Burgess and St. Elizabeth nurses Heidi, Cheryl, Sara and Jamie, who attended to every detail to keep Bill comfortable at home with his wife, family, and friends, per his wishes. Also, great appreciation to his family physician Dr. G. Pizutti, and assistant Mila.
The VISITATION was at Deer Run Church, 1408 Deer Run Road, Leamington, on Tuesday, May 24, 6-8PM, and on Wednesday, May 25, 12-1PM. The FUNERAL SERVICE immediately followed visitation on Wednesday, May 25, at 1PM. Interment has occurred at Graceland Cemetery in Olinda. In lieu of flowers, donations would be appreciated toward the Deer Run Church Building Fund, for a new sanctuary by contacting the Reid Funeral Home, 14 Russell Street, Leamington (519-326-2631). Share words of comfort at www.reidfuneralhome.ca