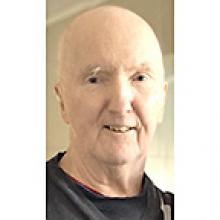 
Is it possible to have no heart left? It was just broken into a million pieces and now it's broken into a million more.
After the passing of his best friend (ex wife) Barbara on December 9, 2021 and his sister-in-law Pat Rowantree on May 15, 2022; it became my Dad's turn to go to heaven. I found him in his in his home after he had a heart attack. He was rushed to St. Boniface Hospital where they tried their best to improve the situation, unfortunately nothing worked. A big shout out to Captain Judge, the first responder, for his kindness and gentle nature. I would also like to thank the intensive care doctor who was wonderful, I can't remember his name, but he knows who is.
Bryan's youngest brother Bill passed before him, his older brother Len Rowantree and his younger brother Ross (Dawn) are left to mourn him; along with his daughter Dawn (Grant), grandson Thane, great-grandchildren, Asher, Skyla, and Summer; and many more family and friends who loved him dearly.
Bryan was raised by a strong, single mother of four rowdy boys (with one exception). They grew up in River Heights on Garwood. He was given the nickname worm; legend has it that it was because he was a tough guy and could always worm his way out of a fight. My dad did not like how short he was, it sometimes made him lose sight of how tall he was in what matters; kindness, generosity, caring, honesty, understanding, patience, humbleness and knowledge (he was my Google).
Bryan worked at the post office for 25 years, and made some really good friends there. He retired at age 49, because they were offering buy-outs. Dad was then able to watch his grandson after school. He enjoyed helping with his grandson's hockey team. He later went back to work as a security guard for CBC, and he was really liked there, which was of no surprise.
Dad loved walking, reading, watching sports, sitting out on his deck and going out with friends for a couple drinks. Dad enjoyed the simple life. In the end my Dad got what he wanted, to leave his house feet first.


"There are special people in our lives who never leave us…Even after they are gone".