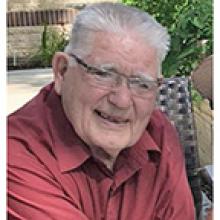 
John E. Klassen, aged 80 years, of Grunthal, MB, passed away on Sunday, May 22, 2022, at 10:20 p.m. at St. Pierre Hospital.
John is survived by his spouse Margaret Klassen, Grunthal, MB, children: Dave, Harold (Mandy), Kenidee, Dan (Michelle), and Les (Cheryl); sixteen grandchildren and seven great-grandchildren.
John was born in the R.M. of Hanover to Frank and Anna Klassen on June 29, 1941. John had attended school until grade seven and then helped on the family farm. On October 18, 1964, John married Margaret Reimer. They had five children and lived in Grunthal, MB, until 1972. From 1972 to 1976 John did missions for Native Ministry's on Matheson Island, MB. John attended what was then CMBC from September 1976 to March 1977. From 1979 to 1987 John worked for Portage Avenue Mennonite Church and was involved with the Sunday School and Christian Service Brigade. In 1987, they moved back to Grunthal, MB, and opened their home to vulnerable persons until their retirement in 2006. John and Margaret built their first house in Grunthal, MB, in 2010. John moved into Greendale Estates in 2018. Throughout his life John was always involved with his church, family, friends, and remained true to his faith.
A funeral service will take place on Saturday, June 4, 2022, at 2:00 p.m. at Grunthal Bergthaler Church, 101 Southwood, Grunthal, MB, with a public viewing prior to the service at 1:00 p.m.
Burial to follow at Grunthal Cemetery, with faspa served after the burial at 4:00 p.m.
Paster Jeff Penner of Grunthal Bergthaler Church will be officiating.
Pallbearers: Stephanie, Tyler, Brayden, Mike, Cody, Sydnie, Silas, Shelah, Isaiah, Barrett and Ben.