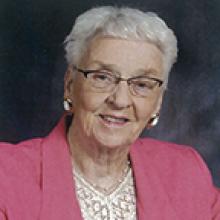 
With heavy hearts, we announce the passing of Mary Lorraine Wildeman, on June 2, 2022, at the age of 100 years. We have the picture from the Queen, of which Mary was very proud, to prove it!
Mary was predeceased by husband Joseph and son Ron. Mary leaves her children, Joanne, Jim (Celine), and Tom (Wendy); grandchildren, Jenny (Darrin), Marni (Scott), Devon (Melissa), Beau, Andrea (Al), and Matthew; and great-grandchildren, Noah, Coen, Brooke, Carter, Elena, and Giuliana.
Born February 17, 1922 in Detroit, Michigan, Mary moved to Saskatoon at an early age and grew up with a love of sports, excelling in tennis. She became a teacher, recalling, with great fondness, her years in a one-room schoolhouse in Allan, Saskatchewan.
Mary married her loving husband Joe on July 1, 1949, and they were married for 44 years, until Joe's passing in 1993.
They re-located to Winnipeg in 1959 and Mary became involved in many community and church organizations including being a member of the Catholic Women's League at St. John Brebeuf Parish. She was also a staunch Blue Bomber and Jets fan, enjoying Bomber season tickets with friends, well into her 80s.
Mary was a loving and devoted mother, and her involvement in the Catholic Church was an important part of her life. Her ability to find laughter in the smallest things was an admirable trait that will be missed.
Mary treasured her many years of travel with Joe, most notably for several years to a winter home in Lake Wales, Florida, where she played tennis and golf with Joe.
Mass of Christian Burial will be held at St. John Brebeuf Church on Thursday, June 9, 2022, at 11:00 a.m. A private family interment will follow at Assumption Cemetery.