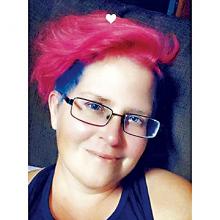 Passed into the presence of her eternal Bridegroom on Friday, May 13, 2022 at Grand River Hospital, Kitchener.
Loving mother of Joseph Ginter, daughter of Karen (Funk) and her husband Russ Critendon.
Survived by her brother Shane & Mandy Funk and their children, Jaleel and Mia.
Jodi was predeceased by 2 stillborn children, Nikki and Jonathan, and her father Tim Funk.
Arrangements have been entrusted to the Glendinning Funeral Home, Plattsville. A Thanksgiving for the Life of Jodi will be held on June 18, 2022 at 2:00, at the Return Ministries headquarters near Plattsville, Ontario. In lieu of flowers, donations directed to a trust fund for Jodi's son, Joseph, would be gratefully appreciated and can be sent directly to the family or to the funeral home.
Jodi arrived 6 weeks ahead of schedule on December 14, 1980 to her parents, Tim and Karen Funk. She was received with loving care and was carefully watched over by her older brother, Shane.
Jodi was the first granddaughter to her grandparents, Harold and Esther Gerbrandt and the first niece to her five aunts and an adoring uncle who doted on her. There was no lack of love and attention from Peter and Nettie Funk and family as well, and she settled into the Funk neighborhood with her cousins and playmates surrounding her.
We chose to homeschool Jodi and her brother for many of their school years. This opened up a wonderful world of friends and activities. Jodi and Shane were involved in the 4-H Beef Club, and soon a homeschooling 4-H Club began, through which Jodi participated in numerous projects together with new homeschooling friends, providing her with very positive and enjoyable learning experiences.
Throughout these years, Jodi had pain, traveling from one joint to another, and was diagnosed with lupus at age 15. Jodi was blessed artistically, enjoying sketching, painting, and many other creative means through which she could express herself and share her love for dramatic beauty with others. Her talents also extended to poetic writing in which she poured out her heart in very descriptive ways. Jodi loved meeting people, and her compassionate heart was quickly moved to help others in need.
Jodi met a wonderful young man while working at her first job. She came to know Jesus as her Savior as a young girl, and now she and Steve were baptized on the confession of their faith and were married soon after. Wedded bliss was difficult to maintain as Jodi lost 2 babies in succession due to lupus and unfortunately, depression followed. Around the time Jodi's father passed away in 2004, another baby was on its way. Miraculously, 3 months early, Joseph Timothy made his entrance into the world. He has been a source of great joy, lots of love and cuddles, a very tender, quietly caring son, often looking after his mother.
In late 2008, Jodi and Joseph moved to Ontario and spent eight years in a family relationship with friend, Bill Benoit. He lovingly helped Jodi through many low seasons of health. He cared for Joseph, and they became quite attached to Bill's children as well.
In 2019, Jodi and Joseph moved back to Manitoba to reconnect with family. Here they received help and encouragement from family and others such as Jayelle Bond, who connected Jodi to Steinbach Community Outreach, and was so helpful in getting her and Joseph settled. However, when Covid restrictions came down, Jodi and Joseph became isolated in their apartment. This contributed to a downward spiral in Jodi's health and emotional wellbeing. We (Karen and husband Russ) journeyed to be with Joseph while Jodi was in the hospital, and what was to be a visit turned into a trip to move them back to Ontario with us. We had not heard Jodi's desperate cry for help, but God did!
This move for Jodi meant total commitment to follow God's path for her life, and she became devoted to Him and to her son. God surrounded them with the people of Return Ministries who had been loving and praying for them for years. He led them to a life-filled church family, Trumpet of Truth Christian Ministries, through which He brought more teaching from the Word, new friends, and much encouragement. Even though the effects of lupus and ITP made her life very difficult, Jodi fed on the Word and became confident of God's healing power as she continued to fight the good fight of faith.
After a period of protracted ill health, Jodi entered the hospital April 30, where doctors did everything humanly possible. Jodi left her physical body, released from her pain and physical restraints on Friday, May 13th and has gone on to that perfect place of healing, wholeness and the presence of her Savior, Jesus Christ! We are rejoicing, so thankful for her faith and love for God Who brought her through many difficult years, thankful that the painful journey has now become an eternity of incredible wonder in His Presence.
We gratefully acknowledge the efforts by the medical teams who all did their best to help Jodi in her health challenges throughout the years.
We thank all of you who have known Jodi - for the blessing, encouragement and friendship you have extended to her and for all the prayers you have prayed on her behalf. God is faithful!
We look forward with great anticipation to being gathered together to join her and many others in worship and adoration of our Great King forever and ever!
"But our citizenship is in heaven. And we eagerly await a savior from there, the LORD Jesus Christ, Who, by the power that enables Him to bring everything under control, will transform our lowly bodies so that they will be like His glorious body." Philippians 3:20-21