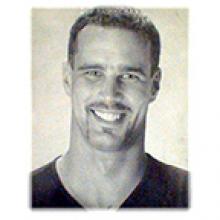 
It is with great sadness that the family of Kelly Eckert announce his passing on Tuesday, May 24th, 2022 from a hard fought battle with cancer.
Kelly was born February 21, 1969 and grew up in La Broquerie, Manitoba. He is predeceased by his father Arnold.
Kelly is survived by his mother Isabelle (Lou), brother Keith (Patricia), sisters Tammy (Jason) and Roxane (Keith). He will be remembered by many aunts, uncles, cousins, nieces and nephews, and by the good friends and co-workers he made throughout the years. Kelly was well liked by anyone he met and made lasting impressions on many.
Kelly was raised on the farm in La Broquerie where he spent time visiting with his big extended family. He attended elementary school in La Broquerie and later Steinbach Regional Secondary School. Farm life was not for Kelly however and he moved to the big city as a young adult. He lived in many cities, including Calgary, San Francisco and finally in Vancouver where he worked as the Senior Maintenance Manager for Loblaw Foods.
The family would like to thank close friends James, Brent, Holly and Lauren for caring for Kelly when they couldn't and for being his family away from home, and for Aunty Alice for flying out with the family to help care for Kelly. Thank you to everyone who sent cards and messages of condolence. Your kind words and support have meant so much.
Private services will be held in Vancouver and Steinbach at later dates.