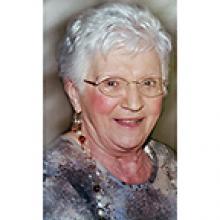 
Mother of Judy Ann Auger, Joan Cyrenne, and Donald Lombaert.
We sadly lost an extraordinary mother, grandmother, great-grandmother, great-great-grandmother, and friend with the passing of Judy Lombaert. She died four days before her 102nd birthday. Judy lived a content, full life and lived through many momentous events: the Great Depression, the Second World War, the 1950 flood, the Polio Epidemic, the Cold War, and great advances in technology (which were not totally appreciated. The tv remote was not her friend). However, she attempted to adapt to every challenge and, into her 90s, was heard telling her children to "google it", or asking about any interesting email. No matter what stage of life she was at, if you asked her about the challenges and concerns and the need to adapt, the answer was always the same, "I've had such a good life. I'm the luckiest person in the world".
Judy was born at home, during a blizzard, on a farm near Swan Lake, Manitoba. She lived there with her brothers, Gerard and Urselin, and her parents, Alphonse and Helena De Blonde. Judy was expected to continue farm life, but fate intervened. Marcel Lombaert lived in Mariapolis, MB, a neighbouring town, but they did not meet until Marcel enlisted in the army and was posted to Winnipeg. Judy was taking a course in Winnipeg to become a hairdresser. (Upon finishing the course she opened her own hair salon in Swan Lake). They dated, fell in love, and married on January 19, 1942. Marcel was soon posted to Kelowna, British Columbia for training, and Judy followed him. When Marcel was deployed to Britain, Judy returned to Swan Lake to live with her parents and her first child, Judy Ann. During this time Judy was employed as a telephone operator. On the job, she found out the war was over when "All the telephone lines started going crazy!" (her words). Marcel was coming home!
When Marcel returned to Winnipeg, they settled in Norwood. With the return of the Armed Forces, housing was scarce. To start, Marcel, Judy, and Judy Ann lived in a converted garage belonging to Marcel's parents. Later, they bought a large three-story house on Eugenie Street and rented out rooms and an apartment. This lifestyle of providing room and board continued for decades, and led to many strong friendships. In those rooming and boarding years there were many Sunday bike trips, picnics, and socializing among all the occupants of the house - even a romance! And it was in this house that Joan was born. Through those years, Judy cooked and cleaned, and provided solace, care, and kindness to all who lived with them. These boarders became family. The "boarder" years continued when they moved to 407 Horace Street, and it was there that Don was born.
Later, after Don was in school, Judy decided to go back to work. She tried several jobs, but found her niche at Laura Secord Candies. Here she excelled, moving from associate to store manager at two outlets, and all the time loving her job, customers and her staff. She was a capable and hard-working woman who loved meeting and talking to people. When Marcel and Judy retired and moved to Kenbur Gardens, in little time they were the new managers of the building. Later they moved to 20 Fort St. in the heart of downtown Winnipeg. And, again, soon managed the building. Some years later, Marcel retired, but Judy continued to work as a leasing agent for the owner, Mr. Bergen, showing apartments to potential renters. She continued this well into her 80s. Her next move was to Dakota House. Here she found a new routine through activities: choir, prayer group, welcoming committee, outings, as well as watching the Jets and curling - she loved them all and appreciated the active lifestyle that the retirement home provided. But even at Dakota House she was often called upon to show her apartment to prospective clients. It was well known that her apartment was always tidy, and that she was always ready to greet newcomers!
After a fall, Judy moved to Vista Park Lodge where she received loving care from the outstanding, respectful staff. She became wheelchair bound and suffered memory loss, but was still the uncomplaining, joking, sweet woman with the most beautiful full head of white hair. She died peacefully in her sleep at Vista, with a staff member nearby.
Judy has been cremated and a celebration of her life will be held at Desjardins Funeral Home at 11:00 a.m., June 25, 2022.
We are forever grateful to Mom's faithful, loving friends, Armand and Shirley Berard. Armand recently passed.
She is survived by her three children: Judy Ann (Raymond Auger), Joan (Claude Cyrenne), and Don. Ten grandchildren: Nicki Jackson (Joel), Michelle Dzik (Dominic), Robert Auger (Tracy), Tom Auger (Katie), Chad Cyrenne (Carolyne), Chris Cyrenne (Jocie), Cory Cyrenne (Tara), Tyler Lombaert, Ryan Lombaert, and Stephanie Meilleur (Jared). Nineteen great-grandchildren: Adam (Taryn), Grant (Leah), Dana, Jack, Joshua, Emily, Daisy, Brooks (through Judy Ann's line), Justin, Vera, Avery, Abby, Charlotte, Calvin, Paige, Brynn, Reese (through Joan's line) and Sloane and Laker (through Don's line). And one great-great- grandchild, Charlotte Grace Jackson (Adam and Taryn).
Marcel, the love of Judy's life, preceded her in 2000.


In lieu of flowers please send a donation to the Winnipeg Humane Society or a charity of your choice.


Family and friends may sign a book of condolence
online at www.desjardinsfuneralchapel.ca.
Desjardins Funeral Home
204-233-4949