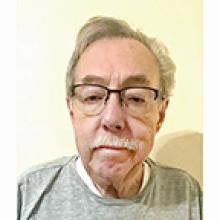 
On June 17, 2022, at Riverview Health Centre, Tony passed on peacefully at the age of 75 years.
Tony was predeceased by his father Isidore (1986), mother Libra (2020), and brother Peter (2004).
Left to cherish his beautiful memory are his wife Clemus, brother Eugene (Debbie), family and friends.
Tony was born at Saint Boniface Hospital on May 12, 1947, the first child of Isidore and Libra. Tony was a lifelong Winnipegger. He had various interests growing up including building model aircraft (especially from the Second World War), bowling, motorcycles, golf, and fast cars to name a few. He also spent many evenings playing sponge hockey and playing cards with his forever friends. Not to be forgotten was time spent watching rented movies or playing board games with his brothers Eugene and Peter. Tony was also an avid fan and supporter of the Winnipeg Jets Hockey Club attending as many games as he could. Tony would always arrive early for the games to watch the pre-game drills and stay till the last horn sounded.
Later in life Tony met his long searched for soulmate and companion, Clemus. Clemus brought the happiness to Tony that he had long been seeking. Tony is now reunited with Dad, Mom, and Peter in Heaven.
Funeral service will be held at 10:00 a.m., Friday, June 24, 2022 at Desjardins Funeral Home, 357 DesMeurons Street.
The family would like to thank the health care professionals that cared for Tony at the palliative care unit 3C at Riverview Health Centre.
In lieu of flowers, donations may be made to CancerCare Manitoba.


Family and friends may sign a book of condolence online at www.desjardinsfuneralchapel.ca.
Desjardins Funeral Home
204-233-4949