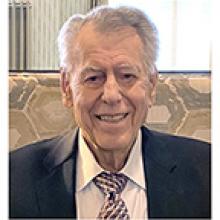 
Richard, affectionately known as 'Dick', had been preparing us for his death since we were kids, and true to his word, it finally happened. Dad had been in the hospital after he fell and broke his hip. The ordeal proved to be too much for our dad and his passing was unexpected. He died in hospital on Sunday, June 26, 2022.
Dick was born January 23, 1940, in Fannystelle, Manitoba to Almir and Bertha (Besse) Arnal and became known as the 'baby of 17'. He spoke fondly of his school years and formed lifelong friendships there. He met our mom when he poked his head outside the Fannystelle Hotel, saw her in his niece's car and thought she looked good. They married on December 26, 1964.
Our Dad was an intelligent Farmer. He was a hard worker, resilient in the face of adversity and cared deeply for his community and the people living there. Like all good farmers, he was skilled, calculated, genuine, sought advice and worried about everything. He'd make time to help others and was a most generous host. He poured his heart and soul into his providing for his family. In 2010, our parents made the difficult but necessary decision to move to Winnipeg. After our mom died in 2012, Dad slowly learned how to live without his beloved Claire. He enjoyed restaurant lunches with the boys; no women allowed (but we think that rule may have changed), day trips to look at stuff, car shows, tractor shows, spontaneously dropping in on people, (which we discouraged) and a bunch of other things we know nothing about. He was becoming softer, a little more vulnerable and much more patient. He took extreme pride in his precious granddaughters. Any time was the right time to talk about them and it didn't matter if he knew you.
He said "no" less often. He began allowing us to do things for him and boss him around all the while muttering "I'm keeping my mouth shut." He'd let the "Je t'aimes" roll off his tongue for no reason whatsoever and spent a fair bit of time in the greeting card aisle of Walmart choosing the perfect sentiments to send to his kids.
In 2021, Dick moved to an assisted living complex. He was apprehensive but it didn't take long to see him make it his home. The staff made him comfortable, his new community eased his loneliness, he was no longer eating solo and much to our surprise was becoming a gym rat.
Dick has a large, extended family and many friends who loved him and find themselves heartbroken and missing him terribly.
He was preceded in death by his wife, Claire (née Désilets), siblings, Gertrude Obee, Denise Marinoff, Hélène Piche, Béatrice Piche, Clara Black, Lilianne Beaudry, Florence Tilt, Alfred Arnal, Léo Arnal, Irène Kuhl, Louis Arnal, Vincent Arnal, René Arnal, Lorraine Tinckam and Jules Arnal and our aunt, Cécile Towler.
Left to cherish his memory and learn his envelope inside an envelope, inside another envelope filing system of important papers, are his children: Julie-Anne Arnal, Jérôme Arnal, (Kathryn Yorga) and Joëlle (Mark) Adams, grandchildren, Lauren and Sophia Adams and sister Rita Albert.
A funeral service and celebration of Richard's life will be held on Wednesday, July 6, 2022, at Sacred Heart Church in Fannystelle, MB at 2:00 p.m. with Father Armand Le Gal officiating. Interment to follow in the Parish Cemetery.
The service will be available to view via Live Streaming. If you would like your name to appear in the guestbook, please email your name to office@afh.ca


Dear Dad, You were right, we don't know what the hell we're doing and we'll stop using so much water. Love, your children.
Adam's Funeral Home of Notre Dame de Lourdes, Manitoba in care of arrangements. Phone 204-248-2201.
To view this obituary and leave condolences, please visit www.afh.ca