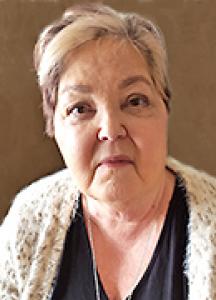 WEISGERBER: Diana Lynn (nee Hazard). On Saturday, February 26, 2022 Diana passed away and departed for the sewing room of her dreams. Diana was born on April 25, 1952 in Moose Jaw, Saskatchewan and eventually became the big sister to six siblings: four brothers and two sisters. Diana moved around a lot with her family early in her life following her military father. Diana eventually settled in Shilo, Manitoba when she met the love of her life, Lawrence and they were wed on November 24, 1972. Diana spent much of her life being a mother to nearly everyone who crossed her path, not just her children, but also siblings, friends, acquaintances, and even strangers; Diana was always concerned with the wellbeing of others and willing to assist and care for them. Diana didn't care to tell you much about herself but wanted to hear every detail of your life she could coax out of you. Illustrated by her common phrase "good n u", spoken as one word when greeted with a salutation of "How are you doing?" Diana wanted to quickly move into inquiring on your wellbeing, concerned and willing to assist where she could and not waste time discussing herself. Diana's favourite activity was sewing. She worked many tailoring, seamstress, and retail occupations related to sewing over the years and it was central to her life. The biggest smiles could be seen on Diana when she was sewing, especially a project for someone she loved. A sewing space and machines were essential for any location that Diana was going to spend any length of time. From wedding dresses to quilts and anything in between Diana loved to sew, often creating her own patterns and designs. Over the past years as Diana's health worsened, sewing remained a crucial and beloved activity. Many innovations and adaptations were used so Diana could remain active with sewing. Diana is survived by her husband Lawrence, her children Michael (Angela), Darrell (Genny), Amy, Joseph, and her grandchildren. The Celebration of Diana's Life took place on Friday, July 1, 2022. Donations in memory of Diana may be made to Diabetes Canada, #401-1 Wesley Avenue, Winnipeg, Manitoba, R3C 4C6.