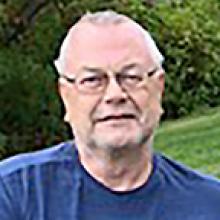 
Gordon Victor Emek passed away peacefully at the Gimli Hospital on July 6, 2022 one week before his 65th birthday.
Gord will be lovingly remembered by his wife Loree; his brothers, Doug (Bev), Ross (Donna) and Marsh. He will also be greatly missed by his stepdaughter Krista Bernier (Claude), stepson Michael Kolly, granddaughter Haley and numerous nieces, nephews and cousins. Gord was predeceased by his parents, Victor and Margaret and first wife Carol.
Gord was born in Winnipeg and lived in numerous homes in the city until he retired. It was then that he decided he had enough of city life and bought a house in Matlock. Gord had spent many happy summer holidays in Matlock at the family cottage.
Gord was an avid curler and had numerous men's teams as well as a mixed curling team. He entered numerous bonspiels and enjoyed curling as well as the social activities that followed.
Gord also loved golfing and enjoyed the golf vacations we took throughout Canada and the United States. The majority of them were with our "trusty " van that we affectionately called Bertha.
He was always anxious for the summer to come so he could spend time at the cottage with all the family. The family grew of course, and his sister-in-law Bev, was in charge of finding space for everyone who wanted to stay and visit. She also organized the meals and whoever was there pitched in. Usually mattresses were spread out on the floor to accommodate everyone and nobody complained.
Gord's pride and joy was his granddaughter Haley. She had a special place in his heart and he would do anything for her. He enjoyed "geocaching'' with Haley, Krista and Loree and it was always a competition as to who would find the cache first. He also enjoyed our BINGO nights and playing cards.
After Gord retired he spent a lot of time woodworking which was his passion. He also enjoyed helping Marsh, Brad, Jim, Brett and Ashley with house repairs and working alongside his brother Ross doing odd jobs for Marsh's work.
Thank-you to Dr. Fulmore, the nurses and staff at the Gimli Hospital that took great care of Gord during his last few days here.
In lieu of flowers, donations may be made in Gord's name to CancerCare.
Memorial service will be held at 2:00 p.m. on Monday, July 18 at Green Acres Funeral Home, Highway 1 East at Navin Road, Winnipeg.


GREEN ACRES
Funeral Home and Cemetery
(204) 222-3241
Condolences may be sent to
www.greenacresfuneralhome.com