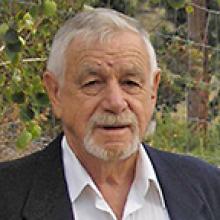 
Thomas (Tom) Irwin Mitchell passed away on July 25 at the Hospice House in Kelowna BC.
He is survived by his loving partner Zoie German from Kelowna, and son Thomas L.C. Mitchell from Calgary, son Drew G. Mitchell from Penticton and Daughter Sandy E. Mitchell from Campbell River. Sisters Helen and brother Gordon all from Winnipeg. Tom was predeceased by brothers George and Ernie. Tom was blessed with six grandchildren and two great-grandchildren.
Tom was born on June 23, 1934, in Winnipeg Manitoba to parents Leonard and Kathleen Mitchell who are deceased. Growing up in Winnipeg led him to work for Eaton's as an electrician. In 1954 he married Pamela L. Beenham and had three children. He worked on the massive Christmas decorations for the main store and brought some home making our house a show piece on the street. After changing careers, he started his own company designing and installing irrigation systems on the Prairies. His other interest was the Winnipeg Canoe Club where he made a mark by amalgamating the Winnipeg Badminton Club with the WCC. He became commodore of the club in 1971, one of his proudest moments. Supporting canoe racing across Canada was a passion for him. Over the next number of years, he had several career changes working in automotive as a Goodyear franchisee in Winnipeg and as a rep for White Farm in Saskatoon. Eventually he retired and moved to Kelowna and then Puerto Vallarta and stayed in Mexico for 14 years. He loved Mexico.
If anyone desires to make a tribute to The Canadian Cancer Society that would be much appreciated.