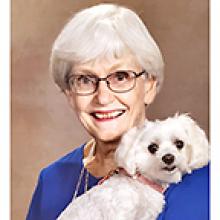 
Mrs. Yvonne Lorraine McNeil Crispin, 92, of Alexander City, Alabama and Winnipeg, Manitoba passed away on Wednesday, August 3, 2022 at Russell Medical in Alexander City, AL.
She was born on September 11, 1929 in Winnipeg, Manitoba, Canada to George Braden McNeil and Beatrice Lorraine Drew McNeil. She lived in Canada, Britain, and the United States and enjoyed travelling to exotic places all over the world. She became a true southern lady and was a humble blessing to the many people she met through her numerous charities with whom she volunteered.
She is survived by her son, George Stephen Crispin (Tanya) of Auburn, AL; daughters, Catherine Yvonne Crispin Scroggins (Wendell) of Alexander City, AL and Susan Lorraine McCrispin of Alexander City, AL, many grandchildren and a great-grandchild.
She was preceded in death by her parents; husband of 42 years, Dr. John Stothers Crispin; and brother, Drew McNeil.


Memories and condolences may be shared at www.radneyfuneralhome.com.