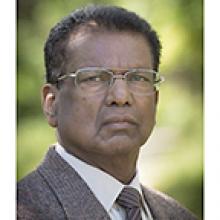 
Aaron was born to humble beginnings in the village of Lower Barrackpore, Trinidad on September 6, 1941. He was the fifth of 11 children.
He was educated in Trinidad and started teaching at the age of 20 where he taught from 1961 to 1966. He was involved in the religious education of children and also involved in the development of sports teams (cricket and soccer).
In 1966 he was accepted to the United College in Winnipeg and followed his older brother's lead to leave Trinidad and come to Canada. He worked very hard to get his Canadian Grade 12 credits and worked for CN Rail to support himself. He supported his fiancé Kamla (nee Samsoondar) to join him in 1967. They married in 1968. He completed his Certificate in Education in 1972 and began working as a teacher at Red River College in the Adult Education Department. He completed his Masters in Education in 1982. He remained at the College for 41 years before retiring as the Chair of Construction and Trades.
Aaron had a strong faith and was a regular member of the Crestview United Church. He was an avid sportsman who enjoyed soccer and cricket in his younger years and golf later in life.
Aaron passed peacefully on July 27, 2022 at the Health Sciences Centre. We would like to express our sincerest gratitude to the caring staff at the Health Sciences Centre and Concordia Hospital who provided care for him in the last month of his life.
He is survived by his loving family, sons, Stanley and Solomon; daughters-in-law, Katarzyna and Sabrina and grandchildren, Athena, Adia and Angelo.
A memorial service for Aaron will be held at Thomson "In the Park," 1291 McGillivray Blvd. on Thursday, August 18, 2022 at 10:00 a.m. To view the service online please follow this link: https://youtu.be/_MrRtSIyKTw


THOMSON "IN THE PARK"
204-925-1120
Obituary may also be viewed and
condolences may be sent to
www.thomsoninthepark.com

Thomson In the Park Funeral Home and Cemetery