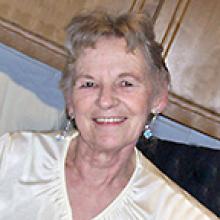 
It is with profound sadness that we announce the passing of Joan Leona Haley (nee Fraes), peacefully on Saturday, August 6, 2022. Fortunately, many family members were able to visit and say goodbye in the last week.
Joan was predeceased by her husband Reginald in 1993, youngest son Reggie in 1999 and her parents, Thelma and Richard. She is survived by sons, Randy (Andrea) and Rick (Vanessa), grand-children Rowan, Caelen, Ellerey, Jess, Anna, Shaye, Bailey and three great-grandchildren. She is also survived by sister Dianna (Edward) and nieces, Tricia and Tracy.
Joan was born in 1939 in Winnipeg. She grew up in the Point Douglas and Elmwood areas eventually settling in North Kildonan. She attended Argyle, Norquay and Lord Selkirk Schools. She played volleyball and softball growing up and was an avid accordion player, performing in theatres throughout Winnipeg in the 1950s. She loved to tell stories about helping to feed volunteers during the 1950 flood, hanging out at The Roxy Theatre or hunting and fishing with her father and grandfather.
She met the love of her life, Reg in the late 1950s and they were married in 1960. Together they raised three boys and provided a nurturing and caring home. Her favourite place in the world was her cabin at Twin Lakes beach. She began visiting there in the 1950s and her and Reg were able to purchase their own place in 1972. She loved going for walks, tending to her vegetable garden and watching sunsets.
Mom worked as a typist and bookkeeper for various local businesses prior to having children, including Western Messenger for her father and her husband's many business ventures. She will be remembered as always being there to drive a station wagon full of hockey playing boys or car full of drums and amplifiers around the city. It seemed she spent the bulk of her adult years being a nurse to her ailing husband and son, yet she never complained, even when she had to go back to work to support them. Losing them was very hard on her, yet she persevered.
Joan was a fantastic grandmother, always happy to see and spend time with her grandchildren. Even though living in a house with four hockey players and saying she never wanted to sit in a cold arena again, she was more than happy to attend her grandchildren's games. She enjoyed crossword puzzles, going for walks or just chatting with her sister on the phone.
Joan was independent, never expecting anything from others though quick to support family and those in need, devoting countless hours to crocheting and knitting blankets, scarves, and baby clothing to support local charities. She had a great sense of humour and taught us much about life. We were awed by her bravery and acceptance of recent health issues.
With limited mobility over the past year, Joan spent many hours viewing nature from her bedside window. She recently commented that she had never paid much attention to the clouds in the sky but had now gained an appreciation for their complexity and beauty. May clouds provide us all with similar pause, and comfort in the memory of Joan's wonderful life.
As per her wishes, there will not be a formal service. Cremation has already taken place. Interment at Elmwood Cemetery will occur at a later date.