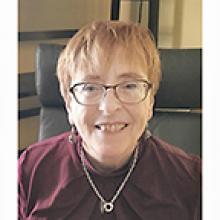 
It is with great sadness that the family of Cynthia Spratt Goodmundson announce her unexpected passing on July 27, 2022, at the age of 63 years.
Cynthia leaves to mourn her sister and brother-in-law Karen and Ron Watson, her sister-in-law and brother-in-law Kathy and Don Cobb and family, her brothers- in-law Terry Goodmundson (Bob) and Al Goodmundson (Carol) and family, her aunts, Merle Hunt and family and Pearl Spratt and family as well as cousins, friends and colleagues. She was predeceased by her parents, Jessie and Carman Spratt, her grandparents, and some uncles, aunts and cousins.
Cynthia was born in Neepawa and resided in Kelwood, MB until the age of 18. She attended Kelwood School, played the organ at the Anglican Church, went to England with her family and graduated in 1976. She moved to Winnipeg to attend the University of Manitoba. She graduated from the Faculty of Social Work in 1980. During this time both of her parents passed away. She worked in Winnipeg at Jewish Child and Family Services and in Killarney and Winnipeg for the province of Manitoba in family mediation and conciliation. She was a dedicated professional. She retired in 2018. She was introduced to Eric by friends and was married August 19, 1991. They enjoyed a happy married life until Eric passed away in 2007. She enjoyed gardening, music, a dinner group, cross stitch and travel. She went to England, Europe, the U.S., Mexico and her treasured last trip to Italy. She was a wonderful sister, wife, auntie, friend and colleague.
A celebration of Cynthia's life will be held at 1:00 p.m. on Friday, August 19, 2022 at Neil Bardal Funeral Centre, 3030 Notre Dame Avenue, Winnipeg, MB.
In lieu of flowers, a memorial donation can be made to the Heart and Stroke Foundation, the Canadian Cancer Society or a charity of your choice.
Many thanks to the Fire Paramedic unit and Winnipeg Police for their assistance.