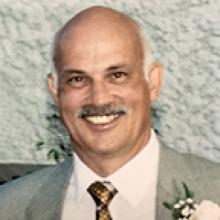 
Brian Parkhurst passed away August 10, 2022.
He was born to parents, Mary and Kelvin Parkhurst in Trail, BC, August 14, 1947. He graduated from Viscount Bennett High School in Calgary, and went on to earn a gold medal in the Faculty of Commerce at the University of Manitoba. He then became a CMA and spent most of his career in commercial banking predominantly at TD Bank. He spent time with the bank in Winnipeg, Regina, Edmonton, and Saskatoon where he and his gregarious sense of humour made their mark. Throughout his post secondary education and career, he kept a strong connection with his poker group that remained buddies for over 50 years.
Brian and Donna were married in 1970, and raised two children together, parted amicably and have remained friends since their 1989 divorce. Brian was then fortunate enough to find love a second time and married Evie a decade later, developing a parental role with her two daughters as well. They loved travelling, wintered in Mexico, and later Arizona and treasured their Grand Beach time every summer.
Brian is survived by his four children, Sherry Gard (Jayson), Jim Parkhurst (Amanda), Kelly Beech, Kacey Anderson (Alicia), grandchildren, Jack, Luke, Matthew, Graham, Kirbee and Charlie, as well as his two sisters, Barbara Fraser, Allison Stefanyshyn (Richard), brother-in-law Jerry Ilchyna and their families. He was predeceased by his parents, Mary and Kelvin Parkhurst, and his sister Gerry Ilchyna.
Brian was known for his love of sports, news, politics, and storytelling abilities. He had a new joke, quip, story, or family accolade to share with anyone he met. As he had health challenges for numerous years, the extensive medical staff he encountered were no doubt treated to the same.
Warmest thanks to Doctors T. Buchel, S. Armstrong, J. Embil, V. Woo, M. Raabe, J. Enns, T. Tufescu, G. Eschun, B. McCarthy, the multitude of multidisciplinary staff at Seven Oaks, St. Boniface Hospital, and Health Sciences Centre that took the time to share a chuckle with him while providing excellent care
A Celebration of Life Wake will be held Monday, August 15 from 1:00 p.m. to 4:00 p.m. at Norwood Community Centre, 87 Walmer Street. We hope you have an anecdote to share.
In lieu of flowers, please donate to a charity of your choice - The Kidney Foundation, Diabetes Canada, and the Heart and Stroke Foundation are important to our family.