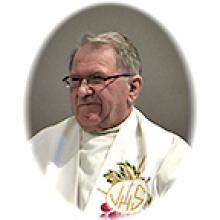 
Father Lucien Alphonse Joseph Roy was born July 6, 1937 to Lauria Martin and Leo Roy in Willow Bunch, Saskatchewan. He was the fifth of ten children. From a very young age, it was clear that Lucien would be called to the priesthood.
He attended College Mathieu in Gravelbourg, Saskatchewan for his High School and Baccalaureate. Lucien then studied at the Saint Boniface seminary, he was ordained a priest in Willow Bunch, Saskatchewan for the Diocese of Gravelbourg and went on to do parish work for ten years. He was an enthusiastic, energetic and deeply committed young priest to the parishes of Pontex, Swift Current, Gravelbourg and Eastend. Lucien loved to read, to travel, to explore and to experience new things. This led him to join the Canadian Armed Forces in 1971. For the next 23 years, he was stationed on bases in Bagotville, Quebec, Calgary, Alberta, Halifax, Nova Scotia, Cold Lake, Alberta, Portage la Prairie, Manitoba and in Lahr, Germany. Lucien also served in several UN peacekeeping missions in Norway, Cyprus and Egypt. In 1994, he retired from The Forces as Lieutenant Commander.
Lucien then chose the Archdiocese of Saint Boniface where he served the Blessed Sacrament, Holy Cross with St. Thomas More and Saint Emile parishes for 17 years. He was incardinated in the diocesan clergy of Saint-Boniface in 1997. His commitment, his dedication, his generosity and his genuine concern for people made him loved and admired by many. His warmth shone out of his energetic embrace of all people, listening to and loving everyone.
Beyond his strong dedication to religious service, he was multifaceted with deep knowledge and interest in world politics, sports (especially baseball), the performing arts, literature and geography. He was also deeply committed to supporting the indigenous community, the Knights of Columbus and the arts. Lucien had a zest for life. He enjoyed the symphony and the ballet. He also learned to cycle, swim, scuba dive and play the organ later in life.
Lucien is also a beloved brother, brother-in-law, uncle, godfather and cousin who generously shared his time and his love. We will miss his warm singing voice, his sense of humour and his infectious laughter.
He was predeceased by his father Leo, mother Lauria, brothers, Henri and Raoul and is survived by his brothers, Bernard, Robert, Albert, Gerard, Richard and sisters, Jeanne Sloane and Marguerite Broten. He is loved by many nieces, nephews, great-nieces, great-nephews, extended family and friends across the country and around the world.
Funeral services will be held at the St. Boniface Cathedral on Tuesday, August 16, 2022. Viewing at 9:00 a.m. / Eulogies at 10:00 a.m. / Funeral Mass at 10:30 a.m. To view the service for Father Lucien Roy, please go to the following link:


In lieu of flowers, please donate to a local charity of your choice.


Family and friends may sign a
book of condolence online at www.desjardinsfuneralchapel.ca.
Desjardins Funeral Home
204-233-4949