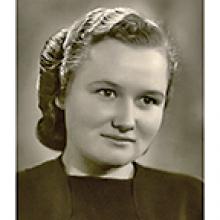 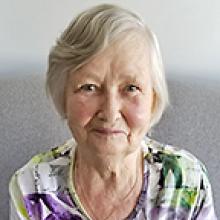 
Stefania — beloved mother and baba, took her first breath in Komarno, Ukraine and her last in Steinbach, Manitoba. Her death was as considerate and selfless as her life. After a long decline from heart failure, mom peacefully slipped away in the stillness of the night, as her loved ones rested.
She lost both parents by age seven and was on her own at 15, moving to Lviv to work first as a nanny and then at a jewellery factory. In Lviv, she found a loving surrogate mother in her landlady Anna, a kindly childless widow. She also met Joseph Sobko, who won her heart over other suitors with romantic letters. She was kind and beautiful; together they were kindred spirits forged by hardship. They married in 1956, followed by the birth of daughters, Halyna in 1957 and Oksana in 1963.
When the opportunity arose to immigrate to Canada, she faced a difficult choice between leaving her beloved Anna, or giving her own children a better life far away. Starting over at nearly 40 was difficult, but mom and dad pulled together to buy a home and make a new life in their new community. In Winnipeg she worked at the International Inn, Old Dutch, University of Winnipeg and Riverview Health Centre.
Mama was the beating heart of our family and a giver in a world of takers. From providing a life-saving skin graft when her first baby developed gangrene, to looking after three young grandchildren for years so the same daughter could return to school and work after being widowed, mama came through. Despite her own health issues, she looked after dad before he died from cancer three years ago. She worked hard, loved deeply and had a strong faith. She was a perfectionist in her domain. Her signature dishes — tender pyrohy and melt-in-your mouth holubsi, plump pampushki and gourmet borscht with mushroom dumplings were par none.
The Covid-19 shutdown and declining health forced a move to elder daughter Helen's home, where she received tender nursing care and lived a further two years despite a palliative diagnosis in the spring of 2020. Both daughters and their families worked hard on mom's behalf to meet all her needs.
Both the public viewing and service will be held at Cropo Funeral Chapel, 1442 Main Street. The viewing is on Friday, August 19, from 6:00 p.m. to 8:00 p.m. and the service at 11:00 a.m. on Saturday, August 20. Interment to follow at All Saints Cemetery, 4535 Main Street.
In lieu of flowers, please consider a donation to charities supporting relief efforts in Ukraine.


This obituary can also be viewed at www.cropo.com