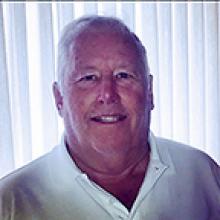 
It is with deep sadness that we share the sudden, peaceful passing of Robert Allan Baldwinson, affectionately known as Baldy to his golf friends, at his home, on September 15, 2022.
He is survived by his loving wife Diane; his daughter Lisa (Ryan Lebaron), grandson Asher; his son David (Brenna Kelly) and grandchildren, Clayton, Chase, and Chloe; as well as his mother-in-law Mary Kozubniak, sister Linda Laurin (Gord Kreitz), sister and brother-in-law Darlene and Perry Kozubniak and many other relatives and friends. He was predeceased by his mother and father, Edna and Al Baldwinson, his sister Donna Brownridge, and his father-in-law Nick Kozubniak.
Robert was born in Winnipeg on June 17, 1951. He grew up in St. Boniface and attended Nelson McIntyre Collegiate. In his early adult years, he managed several Salisbury House restaurants in Winnipeg and Swift Current. He returned to Winnipeg in 1974 and joined his parent's insurance agency, where he met the love of his life, Diane, and they were married on June 18, 1977. He purchased Baldwinson Agencies in 1984 and went on to have a successful career until retiring in 2016. The business was sold, but the name Baldwinson Insurance still lives on!
Robert was an avid golfer and curler. Robert was a lifelong member of Rosemère Golf and Country Club, joining as a junior. He developed many friendships during his time there. He was also a long-time member of the Fort Garry Curling Club, dating back to their original location off Main Street. Above all that, Robert was a loving husband, father, and proud grandfather, always being hands on and a strong presence in his grandchildren's lives.
A funeral service will take place on September 23, 2022, at 10:00 a.m. at Sts. Peter and Paul Ukrainian Catholic Church, 390 Marion Street. Attendees will be required to wear facemasks.
In lieu of flowers, please consider donating to the Heart and Stroke Foundation in memory of Robert.