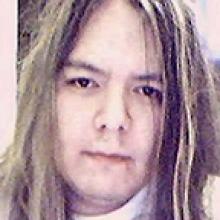 
We are deeply saddened of the passing of our dear son, brother, uncle, great- uncle and friend, Vincent Bruyere, in the early morning hours on September 8, 2022, at his residence in Winnipeg.
Vincent is survived by his parents, Linda and Bruce, his long time and life partner, Shannon, siblings, Aaron, Michelle and Daniel (Caroline), nieces, Abigail (Branden), Danielle (Marcus) and Mackenzie, nephews, Justin, Aidan, Eric Jr. and great-niece, Aaliyah. Vincent was called home after a lengthy battle with Muscular Dystrophy! His life was a blessing to all that knew him! In lieu of flowers, friends can make a donation to MD to further research and perhaps find a cure!
With respect to Vincent's final wishes, there will be no viewing, however friends can offer condolences and say a few words here to honour his memory. Friends can also send their messages to Eternal Grace Facebook website. The service will be held on Friday, September 23, 2022 at 6:00 p.m. at Eternal Grace, 10-1111 Logan Avenue, Winnipeg, MB.
Anyone who has lost a child will know we never really get over the pain but we learn to live with a new focus! We may think our feelings of grief will never go away but through time and healing we can find purpose and happiness again. Vincent lived with Muscular Dystrophy since he was 18 years old. He suffered for approximately 32 years. Our son lived for a reason, a reason we may not understand at this time. Sadly, his life was cut short by complications from pneumonia caused by Muscular Dystrophy destroying his ability to breathe. At an early age as the disease progressed, he lost most of his mobility. Soon he was unable to walk, his wheelchair became his source of movement.
Vincent grew up in the Weston area and attended primary school at Cecil Rhodes and secondary school at Tec Voc High School. Before his illness, he loved to play street hockey with his dad, brother Aaron, sister Michelle and many friends from the neighbourhood. They used to play for hours on end particularly on weekends. His favourite player was Mike Bossy who played for the Stanley Cup winning New York Islanders. Vincent loved surprising opposing goalies by shooting as soon as the puck touched his stick and no doubt, he scored many goals just like his idol did.
As Vince continued to lose use of his muscle and mobility, he educated himself in the use of computers and many computer programs. If anyone asked for technical advice on computer use Vince was there to explain and fix the issue. He possessed this special gift and talent and enjoyed helping others. Part of his education included accounting and he worked towards his CGA designation. He was gifted in mathematics and loved working with numbers.
Unable to compete in physical games as he once did, Vince changed his focus to music and became an avid fan of all types, including Blues and Rock and Roll. Friends would come over just to listen to his play list. As he aged, Vince became really mature and wise for his age! Although he was not rich, he left a legacy of personal values like leading a humble life. He was always genuine, never pretentious, respectful, honest and was helpful to those who associated with him. In closing, Vinny loved the great outdoors, music, sports, animals, mother nature and most of all he loved his family and fellow man. He had a very close relationship with his brother Aaron.
As we lay Vince to his final resting place, the family would like to thank all those who cared for Vince, in particular, staff at the Health Sciences Centre, Home Care Services and his occupational therapist, Ally, Sagkeeng community organizations, many cousins and friends.


Vincent will be dearly missed!