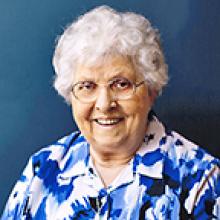 
Peacefully, on Tuesday, September 13, 2022, at Eagle Ridge Hospital, Port Moody, BC, at the age of 87, with her surviving siblings at her side, God called Yvette home.
Yvette Emilia Regnier was born June 6, 1935, to Noéma Nadon and Henri Regnier in Paradise Hill, SK; the third of 11 children. Yvette entered the Sisters of the Child Jesus June 16, 1950, in Sherbrooke, QC. She took the Holy Habit on February 10, 1951, and was given the name Sister Henriette Marie. She made first vows February 11, 1953, and final vows February 11, 1958. Yvette received her teaching certificate from UBC and spent the first 20 years of her life as a sister, teaching in various places in British Columbia and Saskatchewan, with her last two years as a teacher (from 1971 to 1973) spent in Cole Bay, SK. The fall of 1973 found her in Saskatoon and then in the fall of 1974 she moved to Toronto where she fulfilled her dream of becoming an RN. Yvette spent the second half of her life nursing in various places in Saskatchewan and Manitoba before going to Chesterfield Inlet, NWT in 1994 where she spent a year nursing and doing missionary work. A sabbatical in 1995 found her at the Provincial House in North Vancouver, where she helped nurse Sister Monique Puech and then she was off to Africa for another time of nursing and missionary work.
Shortly after celebrating her 87th birthday, Yvette suffered a stroke from which she never recovered. Although we will miss her physical presence with us, she lives on in our hearts.
We, the Sisters of the Child Jesus want to say "thank you" to her for all she contributed to our religious family. "Well done good and faithful servant!"
Yvette is predeceased by her parents, her brothers: Clement, Octave, Lionel, Henry and Marcel; her sisters: Henriette and Lorette and many of her religious sisters.
Left to mourn her passing are her sisters: Judy (Ben) and Lorraine; and her brother Leo (Mary Ann); numerous nieces, nephews, great-nieces and nephews and the Child Jesus family.
Prayers will be held at 7:00 p.m., Monday, October 3, 2022, at Kearney Columbia-Bowell Funeral Chapel in New Westminster. Her Funeral Mass will be celebrated at 10:30 a.m., Tuesday, October 4, 2022, at Our Lady of Lourdes Catholic Church in Coquitlam, BC.


Condolences may be left at www.kearneyfs.com