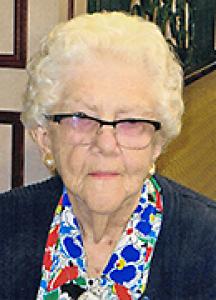 CRANDLE: Marguerite Elaine "Maggie" (nee Andrew) was born in Hamiota, MB on October 8, 1933 and completed her schooling at both the Crandall and Hamiota schools. Upon high school graduation, she travelled to Winnipeg and graduated from the Manitoba Normal School in 1952. She went on in future years to complete a Bachelor of Arts Degree from Brandon University in 1972. She began her teaching career in Kenton. From there she went to Minnedosa where she met her husband, Doug. In 1957 they moved to Brandon where Maggie continued her career at George Fitton, Central and Meadows School where she stayed until she retired in 1992. Maggie was a well-known teacher in the community, known for her dedication and creativity in the classroom. People knew her for her love of cats and other friends who visited the classroom such as Laddie the Lardnarc and Gus the Ghost. In 1989, she received an award from the Canadian College of Teachers in recognition of her outstanding contribution to quality education. A highlight for Maggie was a once in a lifetime trip to Russia in the 1970's with her close friend Jean Picard which resulted in many treasured memories. Upon Maggie's retirement from teaching, she kept active, involved in many different organizations such as the First Presbyterian Church, the Heather Club, the Red Hat Society, the Delta Kapp Gamma Society International and the Humane Society to name a few. She also loved to decorate her house and give tours for special occasions such as Halloween. A great love for both Maggie and Doug was the Brandon University Bobcats. She was a longtime supporter and enjoyed attending games (especially basketball) and getting to know the players. She was known to give hugs! Maggie spent the last few years of her life at the Valleyview Care Centre. We extend our thanks for the excellent care that she received there. She is predeceased by husband Doug and brother Ted. She is survived by brother Harry (Marlene), sister-in-law Lois, nephews Ron (Sandra), Don, Ross (Jennifer), and niece Carmen (Ray). She enjoyed spending time with her great-nieces and nephew Emma, Leah, Emma, David and Sophie. She is also survived by many dear friends. At Maggie's request, a small internment will be held at a later date. For those so desiring, donations may be made in Marguerite's memory to the Brandon University Bobcats, c/o Brandon University Foundation, 270-18th St, Brandon MB, R7A 6A9 or to the First Presbyterian Church, 339 12th St, Brandon, MB, R7A 4M3.