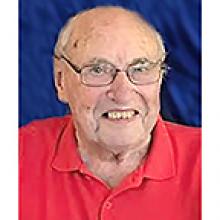 
It is with deep sadness to announce that our dad, Wilbert Laurence Schalla, has passed away peacefully, with family by his side at Bethesda Regional Health Centre, Steinbach, MB, on Thursday, September 29, 2022.
Wilbert leaves behind his three daughters: SANDRA (Colin) Kihn, their children Dana (Stephane) and Brexton Saindon, Chloe, Brett (Alyssa); daughter CANDICE (Mark) Kihn, their children, Chelsey (Jayme) and Silas Gunderson, Bailey (Doug) and Kenzie, Sydney McLachlan: daughter BARBARA (Pierre) Gosselin, their children Pierre-Alexandre (Brittany) and Carter Gosselin, Mackenzie (Kiah) Gosselin.
He was predeceased by his wife Marilyn (Marlene) in January of 2021, his parents, August Schalla, Pauline Freund, step-father Rudolf Freund, sister Elma Schalla, sister and brother-in-law Romelda and Bill Fuchs, parents-in-law Heinrich and Alvina Betzold, as well as sister-in-law and brother-in-law Noreen and Dick Wiebe.
Wilbert was born on his family farm in Bristol on March 4, 1933. He was baptized and confirmed in the Lutheran faith.
Wilbert met Marilyn Betzold and they were married on June 2, 1956, and were happily married for 65 years. They were blessed with three girls.
Soon after the passing of his father at the age of 14, his family moved to Steinbach. Wilbert had to quit school early to help with the family and started working odd jobs around Steinbach. He was approached to work full time at Loewen Windows. Later he also opened a garage which doubled as a dealership for CASE Farm Equipment and for a short time, a car dealership (Ramblers). He also drove bus for the school division, and raised hogs and sent them to market. Wilbert was offered a job in Winnipeg with CASE IH on their sales team. He took the job and eventually became the sales manager at the head office. He never looked back. Good thing he liked driving, as he put on many miles to and from work. He was honest and fair, and he cared for his clients. He loved to talk and visit with people. He loved this job and was a member of the Case Family for many years until his retirement.
Wilbert and Marlene loved to travel and have seen many great places in the world. His favourite place probably would have been his piece of land with a shop on it, where he enjoyed woodworking, and walks in the great outdoors. He also enjoyed fishing, driving his boat, and being at the lake in summer with his girls. He curled on a mixed Curling team with his wife for many years.
He always loved seeing the grandchildren, whether it be seeing them perform, playing ball or playing hockey. He was so proud of his children and grandchildren.
Faith was very important to him. In his church he served on many committees, as well as chairman of the board.
There was not a place you would go that Wilbert didn't know someone. He would always meet you with a smile, and a warm handshake. Wilbert loved life! He loved his family! Wilbert remained positive and a fighter until the Lord decided to take him home.
The family would like to thank the ER staff at the Bethesda Regional Health Centre, the ambulance attendants, the doctors, nurses, healthcare aids, and the homecare team for their care and compassion over the last while. We would also like to thank Pastor Terry Gudmundson and Rev. Melissa Franklin for your spiritual guidance and prayers.
The Celebration of Life will be held on Monday, October 24, 2022, at 11:00 a.m. at St. Paul's Lutheran Church, 465 Henry St., Steinbach, MB, R5G 0H1.


In lieu of flowers, donations may be made to the Bethesda Foundation or St. Paul's Lutheran Memorial Fund