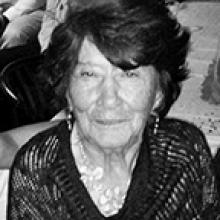 
With great sadness we announce the passing of Rolande Emily Marie (Rolly) Meixner, 84, of Vassar, MB, who passed away on October 22nd, 2022 in Winnipeg, MB, where she was currently living with family.
Rolly was born in St. Malo, MB to Flore (Bruneau) and Laurin Charette on August 11th, 1938. Rolly enjoyed spending time with family and taking care of her grandkids. When she wasn't with her family, she was calling them daily. She loved cooking for everyone, working outside in her garden, sitting outside taking care of her dog Misty and going to visit her special friend Bill. Rolly was a hard worker and always one to take care of everyone. Her family was her life and she was always there for all of them when they needed her or anyone else who needed help.
Rolly is survived by her eight children: Shirley Yurechka, Lillian Meixner (Ray), Joyce Aziz (Nabeel), Gary Meixner (Dianne), Darryl Meixner (Debbie), Karl Meixner (Dori), Terese Bubb (Ben), Bonnie Sweetney (Mike), numerous grand-children and great-grandchildren. She is also survived by her special friend Bill Dokken, her sister Edith Davy and brother Alan Charette, and numerous nieces and nephews. Also, her caregiver of seven years Parick Beirnes, her good friends Sandy Culleton and Kayla Bak and many other close friends. She is preceded in death by her husband Andy Meixner, her grandson Jared Yurechka, her sons-in-law Rene Turgeon and Jim Yurechka, her parents Laurin and Flore Charette, her brothers Oril, Lucien, Eldege Charette and her sister Larraine Mezzo.
The family would like to give a special thanks to Patrick Beirnes for taking such good care of her for the last seven years.
A private memorial service will be held for family at Birchwood Funeral Home on Saturday, November 5th at 7:00 pm. Birchwood Funeral Home will be handling the memorial arrangements.
Honorary Pallbearers will be Teane Bunn, Alex Broesky, Devon Aziz, Reese Meixner, Alexander Brandt-Ganding, Andrew Meixner, Jesiah Bennett and Kedon Sweetney.
Flowers for memorial service will be looked after by Heier Designs Florist in Steinbach, MB.