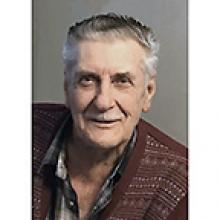 
In lieu of flowers, donations may be made to the Manitoba Lung Association, Winnipeg, MB