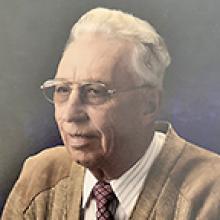 
Elie passed away peacefully on Tuesday, January 3, 2023, at the Ste. Anne Hospital, Ste. Anne, MB.
Left to mourn are his loving wife Adele, and his sons, Olivier and Sharon, Leo and Brenda; grandchildren, Betina, Stacey, Nicci and Kelly, and their families. He is also survived by his sisters, Eveline Ross and Lorraine Vincent; and sisters-in-law, Huguette Fillion, Jeanne Charriere, Raymonde Bourget and Tony and Emma Vincent and Leo and Eliane Vincent. He will also be greatly missed by numerous nephews and nieces and friends.
Elie was predeceased by his father Olivier in 1942 and his mother Ernestine Fiola in 1965; eight sisters, Jeanne Hupe, Antoinette Gauthier, Aurore Desaultels, Luisa Vandale, Lucienne Roy, Noella Trudeau, Simone Massicotte, Merisa Vincent; and two in infancy and one brother Aime in 1995, and many other family members and friends along the way.
He was born and raised and resided all his life in Ste. Anne. He married Adele Fillion in 1954 and they raised their two sons on the Fillion homestead until 2014 when they moved to the Villa Youville.
The family would like to thank the Villa Youville, the hospital, neighbors, family and friends who helped him during his illness.


Go in Peace and Until We Meet
Again You Will Be Missed!!


Funeral arrangements are pending and will be posted on Elie's tribute page at http://birchwoodfuneralchapel.com.