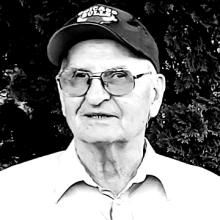 
It is with great sorrow that we announce the passing of Leonard H. Hiebert, age 81 years, of Randolph, MB.
He leaves to cherish his memory his loving wife, Olga of nearly 50 years, his three daughters and two sons and their children, Sharon (Mark) Dain & Aubrey Reimer, James Hiebert (Tara Lambert), Brian Hiebert, Jennifer (Bandith), Ethan, Tiana & Carter Pathammavong and Ally McDonald.
He leaves behind one sister Tina (Paul Friesen) and their family, and two sisters-in-law Helen (Dick) Hiebert and Alvina (Henry) Klassen and many other nieces, nephews and their families. He was predeceased by six brothers, three sisters, two sisters-in-law, one nephew, one niece, one great niece and one great nephew.
Leonard was born on January 11, 1942 in Steinbach. He was the youngest boy in his family and spent his growing up years on the family farm. He started work early, as he and the schoolhouse teacher decided to part ways at the ripe old age of about 13. He worked a few odd jobs and settled into road construction for a couple of years. His brother Jake convinced him to try his hand at plumbing and come join him at Landmark Mechanical. He then spent a lot of time up north at Norway House and in Churchill. He mastered the plumbing trade and was completely self-taught.
Dad met mom in 1972, they were introduced by Cornie and Mary Friesen as attendants at their wedding. Their courtship lasted about 6 months and they were married on March 31, 1973.
When his brother Jake started Southwinds Plumbing & Heating, he convinced dad to join him there. He worked on various projects like the Clearspring Mall, Fernwood Place and Woodhaven, before he struck out on his own in 1989, pretty much because he didn't want to wear steel toe boots.
L Hiebert Plumbing was known for its reputation of good and honest work. Dad had many customers and it was busy enough for him. He appreciated working on jobs with certain other guys who had also struck out on their own, like Jim & Dennis. Dad semi-retired at the age of 65, back in 2007, but kept doing odd jobs for friends and family. His health took a turn for the worse and he needed more time to rest, and fully retired shortly thereafter.
Dad did enjoy traveling and he took our family on a few trips including trips to the East and West coast. Dad often shared memories of the 2 trips to Paraguay, in 1993 & 2003. Celebrating his birthday in the heat was the highlight of the trips. They were hoping to go back again, but his health did not allow it.
In recent years, Dad valued the days when he felt well enough to just putter around the yard, puzzling, and reading his Bible.
He was a man who had strong opinions, and was not afraid to voice them. He loved to chat about faith and salvation, and we know he rests in peace because he is with his Savior and that mom is taken care of.
The family would like to thank EMS and the Bethesda Hospital emergency staff for their care in the last few hours of his life.
Viewing was held from 10:00 am - 11:00 am on Tuesday, January 17, 2023 at Crossings Funeral Care. The funeral service was held at 11:00 am on Tuesday, January 17, 2023 at Crossings Funeral Care, followed by a reception. The interment was held in the Randolph Heritage Cemetery.
In lieu of flowers, donations may be made to the Chortitza (Randolph) Mennonite Heritage Cemetery, 51 Walnut Ave., Mitchell, MB R5G 1G9, or to enVision Community Living.


Family and friends may sign a Book of Condolence at www.crossingsfuneralcare.ca
Arrangements entrusted to:
Crossings Funeral Care
Steinbach, Manitoba
(204) 326-7203