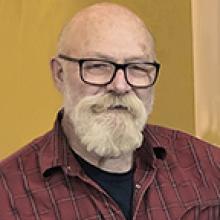 
It is with heavy hearts that we announce the sudden passing of loving husband, father and grandfather, James Linden Friesen at the age of 73.
James is survived by his wife of 51 years Bertha (nee Reimer); his children Heather and Dan Sabot, April and Dale Penner, Esther and Kerri Scott and Peter and Mandy Friesen; grandchildren Kaitlynne, Justin (Sabrina), Cody, Christine, Linda (Braden), Rex, Pippa, Lily, Jaxsen, Shelby, and Daisy; his sisters Jean, Yvonne (Ryan), Joanne (Harry) and Joyce and their families; as well as many other relatives and life-long friends.
James was predeceased by son Paul in 1972; brother-in-law Fred in 1978; father John in 1994; mother Betty in 2013; brother John in 2014; and sister-in-law Chris in 2018, as well as his mother and father in-law.
James was born on December 1, 1949, in Steinbach, Manitoba, to John and Betty Friesen. James lived his entire life in Steinbach where he met his wife, Bertha, in 1970. They married on May 8, 1971, and were blessed with four wonderful children. James was a devoted husband and father who enjoyed many activities with his family including camping, fishing, boating, water sports, card games, bowling and travelling. His grandchildren fondly remember Grandpa for hotel getaways, September long weekends at Moose Lake and his famous waffles on Boxing Day.
James worked in the family business, Friesen Drillers, from when he was a teenager until his retirement in 2015. Throughout James' long career he made many friends and was respected for his incredible work ethic, knowledge and ingenuity (MacGyver had nothing on dad!).
James was a long-time member of the Evangelical Fellowship Church in Steinbach where he was an usher and participated in the Men's Prayer Breakfast. He also travelled to Ukraine in 2018 for a short-term mission trip.
James had a love for anything mechanical and enjoyed spending time on many machines including his boat, motorcycle, snowmobile, quad, airplane and motorhome. He enjoyed ATV quad derbies with Peter and his grandchildren. In his retirement he was able to enjoy more time restoring old vehicles. One of his projects was restoring a cable tool, a turn-of-the-century well drilling machine, which is now on display at the Friesen Drillers' Living Museum. Two of his other notable projects are his homemade three-wheeled motorcycle and his 1952 Chevy truck.
James's passions also included travel. James and Bertha toured in their motorhome to the southern US and Alaska. They also took train trips to Halifax and Churchill, and cruises in Alaska and Europe. One time when Bertha was going on a trip with her sisters, James decided to go on a trip to Uganda, Africa.
James was not one to seek out the spotlight but his patience, strength and gentle spirit drew people to want to be around him and inspired those who knew him to emulate him. We love you James and may you rest in peace. You are forever in our hearts.
The funeral service will be held on Thursday, January 19, 2023, at 11:00 a.m. at the Steinbach Evangelical Mennonite Church, 422 Main St., Steinbach, MB R5G 1Z5, with interment at the Heritage Cemetery, Steinbach, MB, immediately following the service.
If friends so desire, donations may be made to Mennonite Central Committee, Winnipeg, MB, or Adult & Teen Challenge, Winnipeg, MB.